Simon Basketter tells how miners fighting for better pay and conditions were shot down in Lattimer, Pennsylvania, 125 years ago 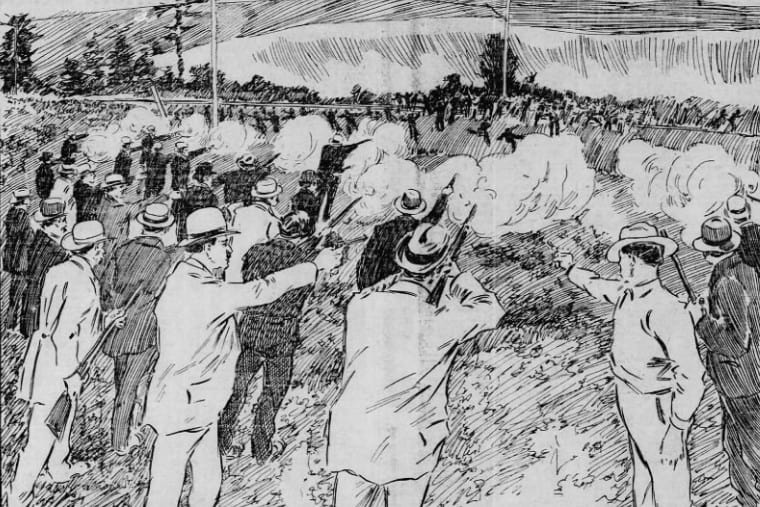 Illustration of the Striking Lattimer miners being gunned down

Anthracite coal miners working in Lattimer, the US, had had enough of the servitude imposed on them in 1897. Largely migrants from eastern Europe, they worked 60 hours a week underground. They were forced to live in company homes and buy what they needed to live from the company store with company cash.

They were supposed to get paid alternate weeks with real money, but that usually didn’t happen. They had to buy their own kegs of blasting powder from the company store, which marked them up by 300 percent.  The Pennsylvania coal industry of the early 19th century attracted miners from Britain. By the 1840s, the Irish replaced them. As mines became deeper, the work became less safe.

By the end of the century, eastern and southern European immigrants were brought in. Coal operators recruited more people than they needed, creating a pool of workers to step in to replace those who were injured, dead or on strike.

The firms used ethnic tension to break strikes. The United Mine Workers of America (UMWA), established in 1890, was concerned primarily with protecting jobs for “English speakers”.

It backed the 1897 Campbell Act, which levied a 3-cent-a-day state tax on coal operators for each non-US citizen working in the mines. The Campbell Act was officially enacted on 21 August. Coal operators quickly passed along the tax to migrant workers. Immigrant miners were already paid 10 to 15 percent less than “English speakers”.

The new cut sparked a wider strike. Groups of strikers marched from one colliery to another, bringing out workers. Sheriff James Martin met with mine bosses. His deputy, Thomas Hall, was the boss that sold the blasting powder.

Martin set up a posse—an official militia—and swore in  87 men as sheriff’s deputies.  They were handed rifles paid for by one coal firm in a warehouse owned by another.

On the morning of Sunday 10 September a group of miners, optimistically carrying a US flag, began a march to welcome workers at the Lattimer mine to the strike. Martin and his deputies harassed the 400 or so men as they walked.

One striker was arrested, another had his arm broken, and the flag was ripped up. The march carried on. At 3.45pm, at the outskirts of Lattimer, the 87 deputies, joined by roughly the same number of coal company police, lined the sides of the road. Someone yelled, “Fire!” so they did.

The firing continued for over two minutes. More than a dozen were shot in the back. At least 19 died on the day, and five more died later from gunshot wounds. Over 8,000 attended the funerals. People marched on the mines and closed them. Some 2,500 state troops were deployed to quell the unrest that followed.

It showed unions that a divided workforce would lose. After the massacre, thousands joined the UMWA. Its president John Mitchell said, “The coal you dig isn’t Slavish or Polish, or Irish coal. It’s just coal.”

That became the rallying slogan for strikes in 1900 and 1902 that won better working conditions, a shorter workday and wage hikes. On the first anniversary of the massacre, 2,000 miners marched. Some $5,000 was raised for a memorial. But Lattimer was still owned by the coal company. It took until 1972 for a plaque to be put up.