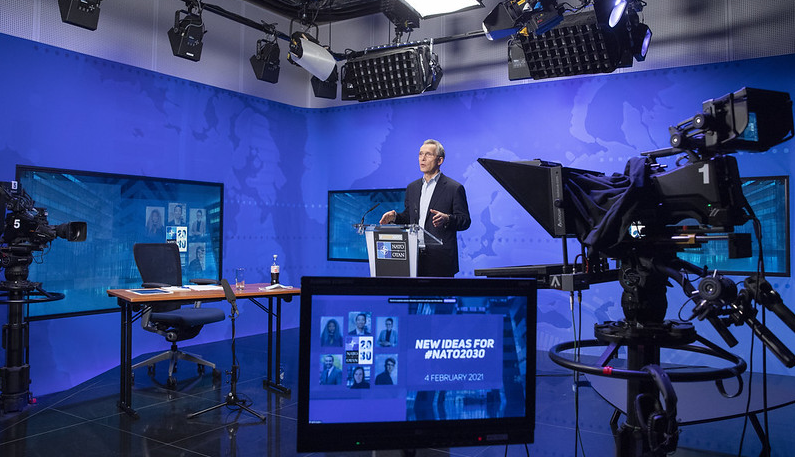 NATO recently commissioned a report on its own future from 10 experts appointed by the secretary-general, Jens Stoltenberg.It opens with congratulations to themselves, as according to the authors, Nato is the “most successful alliance in history.”

I guess it depends on how you define “success.” Provoking conflict by expansion?

Not short on arrogance, the report claims that it is “indispensable” with its “peace-ensuring role” in a world of “competing great powers.”

Throughout the document there are references to “shared principles among the democratic institutions of the Atlantic community.”

You might ask yourself about these shared values which include, say, the US positioning military bases in almost every country on the globe or looking to develop weapons in space; or, internally, still in many states carrying out the death penalty.

The report identifies 13 challenges and threats of which Russia and China top the list.

The whole report is steeped in cold war thinking.

Russia is a “declining power” by “economic and social measures” but it takes an aggressive stance and is “the main threat facing Nato in this decade.”

An even bigger threat is China which poses “important challenges to our security.”

There is also a need to “assess Russia and China co-operation.”

While in no way being apologists for the regimes in Russia and China, talking up the military threats will not lead to stability in the world.

The world, this report says, is characterised by “authoritarian states seeking to expand power and influence.”

At the same time, Nato is looking to further expansion: to bring Ukraine, Georgia and Bosnia into the alliance.

It continues to make agreements with countries around the Pacific and Indian Ocean to face down China.

Britain’s part in this will be to send an aircraft carrier to the Asia-Pacific this spring, while the US is increasing its military presence in the region.

The US Trident nuclear-armed fleet (Trident is “integrated” into Nato) is now mainly based at Bangor on the west coast of the US, having moved from the east coast, with China in its sights.

Is that a reference to asylum-seekers? It was Nato which was involved in wars against Libya, Afghanistan, in Iraq and Syria from where people now flee.

Even more chilling is the report on the future of its nuclear forces. It proposes strengthening its forces in Europe on its eastern flank, providing them with “adequate nuclear capabilities, suitable for the situation created with the end of the Treaty on Intermediate Nuclear Forces.”

What is omitted is that it was the US under president Donald Trump which tore up the treaty.

In other words, the 10 experts have asked the US to speed up the deployment in Europe not only of the new B6-12 nuclear bombs, but also new medium-range nuclear missiles, similar to the 1980s Euromissiles.

The experts also want in future to “continue and revitalise nuclear-sharing agreements,” which allowed non-nuclear countries — Belgium, Germany, the Netherlands, Italy and Turkey — to be ready for the use of nuclear weapons under US command.

This has always been against the nuclear Non-Proliferation Treaty, but as with all the other contradictions in the report, the experts claim they are committed to the NPT.

The NPT states that the nuclear-armed states should disarm in “good faith.”

There is no good faith in Nato. Moreover, Nato blocked its member states from joining the negotiations for the UN Treaty for the Prohibition of Nuclear Weapons which came into force on January 22, thus making nuclear weapons illegal under international law.

Nato cares not a jot for that — they claim it is not international law.

In the report there is a section entitled Women, Peace and Security. But its idea of including women is to deploy more women in its military exercises and operations.

It ignores other aspects of the UN security council resolution 1325 which proposed more women in decision-making on conflict, on conflict prevention, conflict resolution and peace-building.

But then it is a military alliance that is not going to be genuinely concerned with conflict resolution, even though at the end of the report there is a brief reference to solving conflicts peacefully.

There is also a reference in the report to climate change. In future Nato wants to adopt “green technologies.”

Yet another contradiction in terms. Surely expanding its military hardware, building new planes can only increase carbon emissions?

Last but not least, there has never been a Nato report which didn’t demand more money from member states.

This report is no exception. It is essential that all allies maintain their commitment, made in 2014, to increase their military spending to at least 2 per cent of GDP by 2024, it stresses.

There is no acknowledgement of the fact that increasingly people round the world are looking to decrease military funding and redirecting the money to health, social welfare and the climate change emergency.

More and more people can see that the replacement of Trident, costing the people of the UK £205 billion, can do nothing against the threat of the coronavirus.

But, of course, Nato would want more money as behind it stands the military-industrial complex.

Member states should pay up to enjoy what the report calls “the benefits of being under the Nato umbrella.”

That “umbrella” is not a benefit to the world, but a grave danger.