Last Wednesday, German Chancellor Angela Merkel gave a keynote speech in the European Parliament to mark the start of Germany’s EU presidency. It was her first foreign appearance since the outbreak of the coronavirus pandemic. Merkel spoke against the backdrop of new COVID-19 outbreaks on the continent, the deepest economic crisis since the 1930s, and growing tensions between the major powers.

“We are all aware that my visit today takes place against the background of the greatest test in the history of the European Union,” said the chancellor. The global coronavirus pandemic had “hit people in Europe hard and relentlessly,” she declared, adding, “We have over a hundred thousand dead in Europe alone.”

She continued: “Our economy has been and continues to be severely shaken throughout Europe. Millions of workers have lost their jobs.” In addition to “worries about their health and the health of their families,” many citizens “are also worried about their economic existence.” 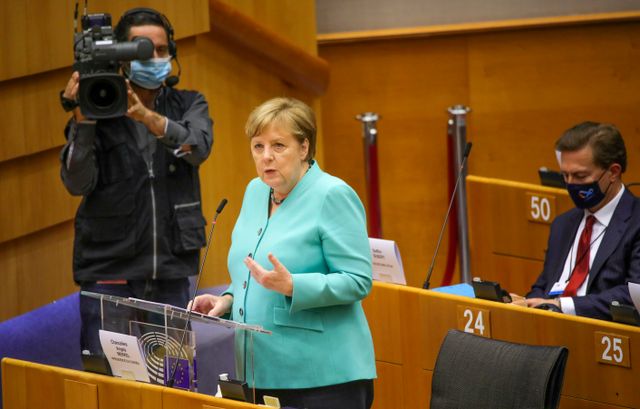 German Chancellor Angela Merkel addresses the plenary chamber at the European Parliament in Brussels, Wednesday, July 8, 2020. Germany has just taken over the European Union’s rotating presidency, and must chaperone the 27-nation bloc through a period of deep crisis for the next six months and try to limit the economic damage inflicted by the coronavirus. (AP Photo/Olivier Matthys)

Merkel, of course, concealed the fact that the ruling class is fully responsible for this disaster. As the pandemic spread in January and February, she concerned herself not with the health of the population, but with the protection of corporate profits. All of the European governments played down the threat and tried to keep the economy and public life running without any impediments.

It was only when the terrible consequences of the pandemic first became apparent in countries such as Italy and Spain that governments were forced to take measures to contain the virus, driven largely by growing anger in the population. The lockdown was then used to organise the greatest bottom-to-top redistribution of wealth in history. Within a very short time, trillions were transferred to the accounts of the banks, the large corporations and the super-rich in the form of coronavirus “rescue packages.”

At the same time, establishment politicians and the media began an aggressive campaign to revive the economy as quickly as possible so as to resume the extraction of massive profits from the working class. The same companies that received billions in state money are now, with the support of the trade unions, using the crisis to push through the mass layoffs and wage cuts they had long planned.

In her speech, Merkel left no doubt that the policy of “profits before lives” would be aggressively pursued. She cynically described the measures to contain the pandemic, which have now been largely lifted, as a “high price,” entailing an attack on “elementary basic rights.”

Merkel praised the 500 billion euro European reconstruction fund she had proposed in mid-May, together with French President Emmanuel Macron. Behind her mendacious lip service to “a socially and economically just Europe,” she made clear that the money would be linked to a new round of social attacks. Europe had to be made “more innovative and competitive,” she stressed several times in her speech.

Above all, she reminded the members of the European Parliament, only by working together could European nations defend their global economic and foreign policy interests. Europe was “not just something that has been handed over to us, some destiny that obliges us,” but rather “something living that we can shape and change.”

She stressed that in a “globalised world,” “Europe does not deprive us of opportunities for action. … It is not without Europe, but only with Europe that we can preserve our convictions and freedoms.”

In other words, only through a unified European military and great power policy under German leadership would Brussels and Berlin be able to impose their imperialist interests worldwide.

The “highest priority of the German presidency,” she said, is “that Europe comes out of the crisis united and strengthened.”

The aim was “not only to stabilise Europe in the short term.” Merkel insisted: “We want a Europe that faces the challenges of the present with self-confidence and courage. We want a Europe that is fit for the future, that can assert its place in the world in an innovative and sustainable manner.” It was necessary to “decide for oneself who Europe wants to be in this rapidly changing world order,” a geopolitical environment that underscored “the need for a strong European foreign and security policy.”

As in previous interviews and speeches, Merkel made no secret of the need to transform the EU into a massively armed military alliance capable of acting more independently of the US. “A glance at the map,” she said, “shows that Europe is surrounded on its external borders not only by Britain and the western Balkans, but also by Russia, Belarus, Ukraine, Turkey, Syria, Lebanon, Jordan, Israel, Egypt, Libya, Tunisia, Algeria and Morocco, among others.” She noted that Europe was living “in a period of global upheaval, in which the force fields are shifting, and Europe—despite the integration of many member states into the transatlantic alliance—is more on its own.”

Europe had also to bring its weight as a foreign policy power to bear on China. “Even if the EU-China summit set for September, unfortunately, cannot take place, we want to continue the open dialogue with China,” Merkel said. “Strategic relations with China” were “characterised by close trade policy ties, but equally by quite different socio-political ideas, especially concerning the protection of human rights and the rule of law.”

Alarm bells should ring whenever German and European heads of state speak of “human rights” and “the rule of law” in regard to foreign policy, since these phrases invariably conceal imperialist goals inevitably associated with attacks on democratic rights. In Brussels, Merkel called for “effective protection of our democracies against cyber threats and disinformation campaigns”—code words for strengthening the state’s repressive powers, especially against the growing left-wing opposition of workers and youth.

The German bourgeoisie has made it clear from the very onset of its presidency that it is willing to put its words into action. Last week was marked by the announcement by the Ministry of Defence of plans to purchase combat drones and the demand by leading German politicians to reintroduce a form of compulsory military service so as to anchor militarism more firmly in society.

All parties, from the Left Party to the extreme right Alternative for Germany (AfD), are working closely together, along with the media, to fuel nationalism. “Germany is now condemned to leadership, there is no other way,” the Redaktionsnetzwerk Deutschland stated in a commentary.

Behind the increasingly aggressive calls for German leadership in Europe are two developments in particular. First, tensions between the European powers are constantly increasing.

After Merkel’s speech, EU Council President Charles Michel warned that in the run-up to the July 17-18 EU summit, stark differences remained among the member states concerning the European reconstruction fund. The proposal that the EU Commission take on debt to give countries at least some money in the form of non-repayable grants rather than loans, he said, was “still difficult, even very difficult for some member states to accept.”

Second, political and social opposition in the working class is growing. The coronavirus pandemic has not only exacerbated tensions between the imperialist powers, it has, above all, exposed the bankruptcy of the capitalist system. Thirty years after German reunification and the dissolution of the Soviet Union by the Stalinist bureaucracy, the bourgeoisie has nothing to offer the vast majority of the population but mass impoverishment, increasing police state measures, militarism and war. Resistance is developing worldwide in the form of mass protests and strikes, which must now be armed with an international socialist programme.