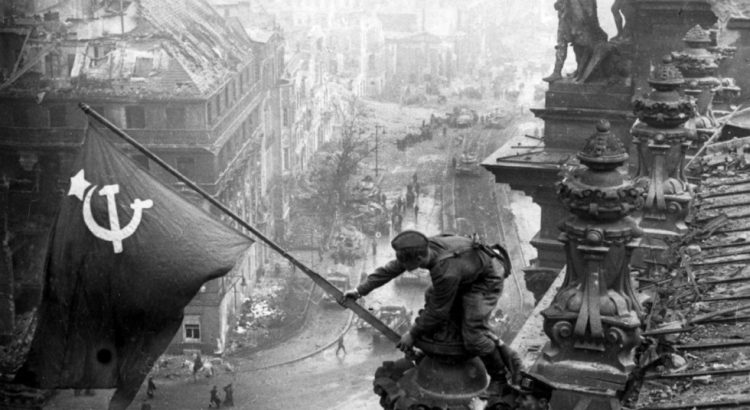 The White House has marked the victory over Nazi Germany in a tweet hailing the role of the US and the UK, while leaving out the nation that sacrificed the most – the Soviet Union. Netizens were quick to provide a history lesson.

“On May 8, 1945, America and Great Britain had victory over the Nazis!” the White House said in a message posted on its official Twitter handle late Friday, complete with footage of a wreath-laying ceremony to mark the occasion.

“America’s spirit will always win. In the end, that’s what happens,” the caption reads.

Neither in the White House’s follow-up tweets, nor in the video itself, is there even a passing mention of other major allied nations, such as Russia, which played a central role in the triumph over the Axis powers, with the battle of Stalingrad (23 August 1942 – 2 February 1943) widely considered to be a turning point in the battle against fascism on the continent.

The conspicuous absence of the Soviet Union on an already very sparse list of nations – which, at least according to the White House, put the last nail in the coffin of the Third Reich – prompted an angry backlash on Twitter.

In a bid to refresh the memory of those handling the account with some hard facts from times long passed, commenters have inundated the historically-challenged tweet with an iconic photo of a Soviet soldier raising the flag over the Reichstag – which throughout the years has remained a symbol of the Soviet and the Allies’ victory over Nazi Germany.

Some couldn’t help but poke fun at what appeared to be yet another attempt (whether intentional or not) by the White House to rewrite history in plain sight of the whole Twittersphere, unleashing a flood of memes on the post.

George Szamuely, a senior research fellow at London’s Global Policy Institute and author of ‘Bombs for Peace: NATO’s Humanitarian War on Yugoslavia,’ opined that such a message would be “inconceivable” during the presidency of John F. Kennedy in the 60s, as well as that of Richard Nixon (1969-1974).

“A repugnant message, an offense to history and to humanity. There would have been no US-UK invasion of Europe had the backbone of the Wehrmacht not been broken by the Soviet people,” Szamuely noted.

The Soviet Union lost some 27 million people during the war, including 8.7 million soldiers, which represents the greatest number of military deaths sustained by any nation involved in the hostilities.

The German military suffered its biggest loss – some 80 percent or an estimated 4 million soldiers – on the Eastern Front, while some 1 million perished on the Western Front, cracked open after the Allies landed in France on June 6, 1944, commonly known as “D-Day.”